This package helps to automatically or manually archive, unpublish, publish, move to trash, move to another category, assign or remove the featured status, change access level and extend publish down the date.

The paid version is available and it has full functionality. See the differences between the free and paid versions.

Version 4.3.3. 28 Jun 2022. Solved the issues for manual executions at the component and operation loading at the content plugin. Also, corrected the mistake in the language file.

Version 4.3.1. 10 Nov 2021. Solved the issue which is related to missing database columns for the paid version.

Version 4.3.0. 4 Oct 2021. The new operation "Extend Publish Down" and the new article selection rule "Published Down" has been added.

Version 4.2.1. 4 Sep 2021. Patch for Joomla 4. Solved the issue, that is related to the less operator for article selection conditions.

Version 4.1.0. 5 Oct 2019. The new global configuration parameter "Extend to Publish Down" was added. This parameter is used to control managing operations to access articles that are unpublished by its option "Finish Publishing" when the AAM condition rule "State equal Unpublished" and the AAM operation "Change State to Published" are used.

Version 4.0.1. 17 Jan 2019. A bug for buttons publish/unpublish/archive in the toolbar and a button toggle in the list was solved. The bug is detected after upgrading Joomla to 3.9.1.

3.5.0. 2014-08-22. 1. "Select by Publishing Date" option has been added. 2. Usage of "Restricted Articles" has been changed. 3. Detection of empty where syntax and the empty selection and empty setting have been improved.

3.2.0. 2014-07-29. 1. New method "Publish" has been added. 2. New filter type "Set of Articles" has been added. 3. Removed a bug related to directory separator from the version for Joomla 3. 4. The group of options, named "Article Status", has been added to this version. Now filters can be applied to published, unpublished, archived, and trashed articles. 5. "Restricted Articles" and enabling/disabling all filters settings have been added to the configuration of the extension. 6. A bug is related to the type of "Number of Articles" removed from the plugin. 7. User interface and description of fields have improved. Now component of this extension is easy to understand and use. 8. "Period" has changed to "Execution Date", has more advanced features. Now a filter could be executed once or periodically. 9. "Order by" global parameter has been moved to the configuration of the filter. Also "Ascending" and "Descending" options have been added to the "Order by" parameter.

3.1.0. 2013-12-27. Joomla 3.x has been supported. Database structure and Extension Name have been changed. Date for ordering and ACL options have been added. The demo version has been released. Empty Trash new feature has been added. Also, very optimal code is written at an advanced level.

2.1.0. Form for creating or editing filters has been improved. New features (periodicity and execution time) have been added. Three minor bugs have been fixed.

2.0.0. Component-based filter manager has been added. Joomla! 2.5 has been supported. 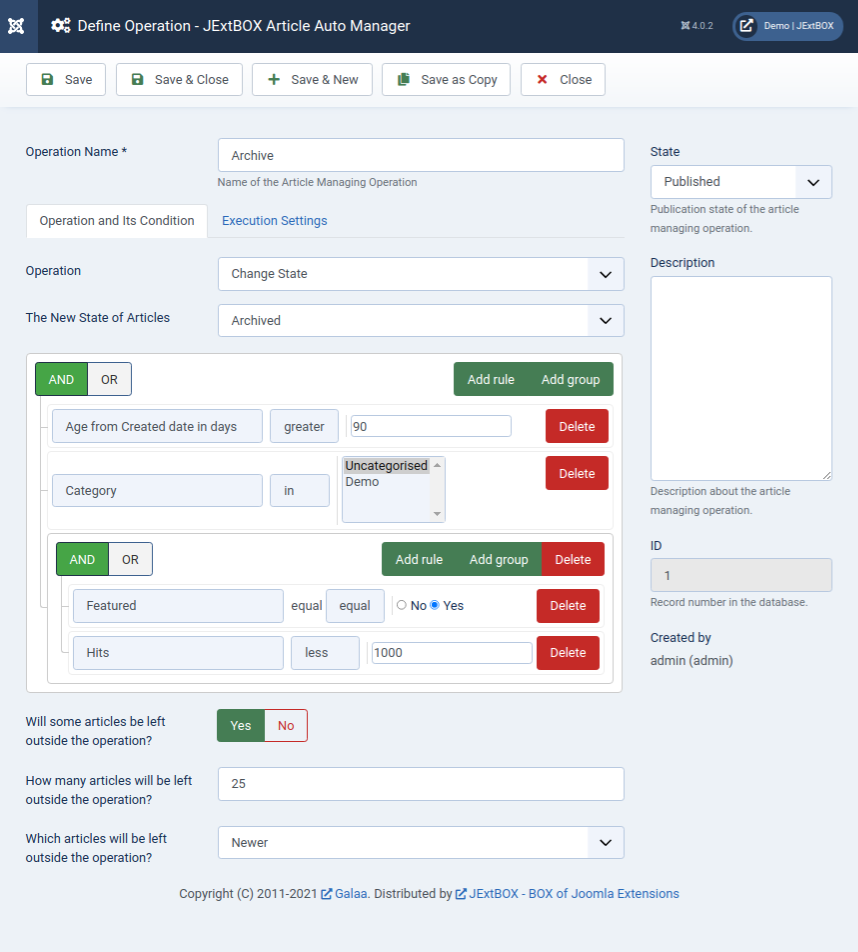 It can not update due to the new update server. Thus you need to install it manually.

Clear cache if the query builder is missing after installing it.

A bug for the visual query builder

Users which are using a major version 4.x.x below 4.2.1 of this extension, should update to version 4.2.1 immediately due to the issue, that is related to the less operator for article selection conditions.

There are all parameters of this extension in the configuration page of the component which is a part of the extension. By using these parameters, you can specify the following options.

A published article managing operation is executed automatically when an article is opened to read by a user on the front-end. Also, it can be executed manually. However manual execution is possible for the paid version only.

Extend Publish Down or Finish Publishing

The operation which is called Extend Publish Down is added a given interval to articles' publish down date/time are not null only.

Difference between free and paid versions

If the full version is installed, all your configurations will be kept and become usable.

JExtBOX Article Auto Manager is free software: you can redistribute it and/or modify it under the terms of the GNU General Public License as published by the Free Software Foundation, either version 3 of the License, or (at your option) any later version.

JExtBOX Article Auto Manager is distributed in the hope that it will be useful, but WITHOUT ANY WARRANTY; without even the implied warranty of MERCHANTABILITY or FITNESS FOR A PARTICULAR PURPOSE. See the GNU General Public License for more details.